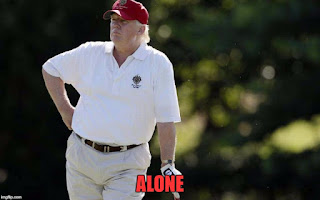 
Donald Trump is friends with many, many people.  He knows the best people.  Smart people.

I wonder what kind of person appears smart to a man like Trump.  We know that the tend to be shy, often avoiding media without a hood.  We know that many are bi-lingual, and that many have a fierce love for culture that magically resides in bronze statues. 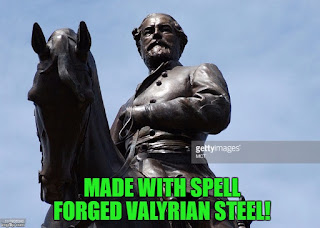 We also know, who aren't in Trump's circle of friends, as of today: 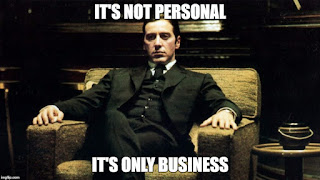 1. Steve Bannon is out.  No one is sure if this is a good thing, or if it matters.  Trump and Bannon basically created each other.  Why Bannon recently told a reporter that Trump and Kim were two blundering fools, and undercut Trump's foreign policy statement, is anyone's guess.

4.  No more job councils.  No more infrastructure council (which was formed by one of Trump's beautiful executive orders).  Why?  Why would they leave him?
Because they have shareholders to answer to.  Who wants to explain to shareholders why they are working for a white nationalist? Not me!

What does this mean?  Well, it means that all those lovely announcements about companies bringing back jobs into America are going to be a much rarer occurrence.  Even to the extent they were genuine, and they were largely bullshit, Trump no longer has any capital to negotiate such deals with our heads of industry.  So that's a major agenda promise that Trump has made much more difficult because of his declining mental faculties and his desire to fight instead of lead.

5. After Trump confessed his love for white culture, coupled with his reviving a fake story about Gen. Pershing to promote illegal acts on Muslims, his generals have pretty much abandoned him. All five heads of the Armed Forces made a bold statement in denouncing racism, in response to Trump's embracing it.  Trump may love generals, but as of yesterday, none of them would bother to wipe their asses with his toupee.

Do I exaggerate? No. Not today.

Here's something else to think about.  What does Trump do when the next KKK rally gets ugly?  When the next act of domestic terrorism is dumped on his doorstep?  How does a president, who has pissed away every last drop of his moral authority, address a moral crisis?

The answer is, poorly.

THE SPEECH WE NEEDED TO HEAR

So here we are.  We have a president who has to be dragged kicking and screaming to the podium, to say "Nazi's bad."


Here's what he should have said:

"I am here today to apologize to the nation.  I was raised in a world where "white nationalism" was considered a good thing.  As many of you know, my father, a man who I have always respected and loved, was arrested at a Klu Klux Klan rally, many years ago.

It's no secret that my father, and later myself, ran many businesses, where we discriminated against black tenants, or black people who wanted to become tenants in our buildings.

Later in my life, I called for the death penalty of five young black men.  After serving many years in prison, they were cleared of their crime.  They were innocent.  But even then, to my great shame, I did not apologize for my words, or for taking out the full page ad calling for the death penalty.

I wish I could say I learned my lesson then, but we all know that I did not.  I promoted  - and lied about - the birther conspiracy regarding President Obama.  Of course, I knew this conspiracy theory was false.  And I, of course, knew this was another dog whistle to appease the worst elements in what is now known as the "Alt Right" movement.  My words and actions were designed to increase distrust of the President, and allow people with hatred in their hearts - hatred for a man because of the color of his skin - to bring their prejudice into mainstream politics and society.

For all this, I am deeply sorry.

All this, I have done to my greatest shame.  I placed what I thought was best for my image, over my duty and obligation to the country. In so doing, I failed the American people, and have injured the country that I promised to serve and protect.

No more.  From this day forward, I will not act to clothe ANY hate group, Neo Nazi, White Nationalist, the Klan, or any other, in a false cloak of legitimacy. Instead, I pledge to work with all communities to unite, rather than divide this country.  I have, I know, broken many promises to the American people.  But, if the American people are willing to give me one more chance, this promise I will keep.

Thank you.
Posted by Splinker at 9:31 AM No comments:

It's been a while!

As many of you know, SplinkerNewsMax was a defendant in an imaginary lawsuit, financed by the Koch brothers, accusing our organization of engaging in a campaign to defame the #sickorangetwist currently defiling the Whitehouse.  The case was thrown out in July, when we proved that we invoked the Jared defense, and proved we were way too disorganized to wage a campaign against the president.

So, we're back!  When we last posted, the country was drowning in Day 141 of the Don-pranos.  Since then, we've seen:

1. Spicer denied a rose;
2. A Moochie roofied and carted away in the dead of night;
3. One Trump lawyer disappear after engaging in a drunken twitter rant.
4. Reince Priebus sent to bed without supper and forbidden to play Chief of Staff anymore;
5. Paul Manafort place his nuts in Mueller's cracker;
6. Trump trying to fire his own cracker AG;
7. The nationalist, white power parties try to push Gen. McMaster out of his position as National Security Adviser.
8. A second Grand Jury.
9. Trump tweeting about anything he can think of to distract us from his criminal activity, including lying about his reasons for trying to deny transgender people the right to serve in uniform, lying about telephone calls with Mexico, the Boy Scouts, and Australia.
10. Leaks that confirm the president whined to Mexico that they can't say they won't pay for the wall, because that will hurt him politically.
11. Throwing his Sec. of State under the bus, by having an off-off-broadway actor named Gorka, come out and say to listen to Tillerson about military matters is nonsensical.
12. Diplomats playing Trump Bingo, where they get points whenever he uses one of the 28 words he still remembers.
13. Trump deciding to out Kim, Kim.
14. Russia expelling 750 diplomatic personnel, and Trump thanking Putin for saving us money.
15. The largest white nationalist, Nazi, KKK march in my memory, capped by a white nationalist running over 19 people and the president still refusing to simply say, "White Nationalists are scum."
16. Rumors that Eirc Trump has hacked the parental block code on his cable TV.

That's a lot! And only what we can recall before the first cup of coffee.
And we're exhausted!

SNAPPLE FACT: Trump is a terrible poker player.  All he does is bluff.  Every. Single. Time.

That's it!
Maybe we'll catch our breath tomorrow and delve into a few things.  Like: the lawsuits against Trump by two ethic watchdog groups, the possibility that N. Korea has been Trumped up for ratings, what it means when your president requires a propoganda folder - twice a day - to make him think he's doing a good job, and all kinds of interesting things!

Posted by Splinker at 7:03 AM No comments: