I've Been Deader: The Musical!

To borrow an expression from my friends on the wrong side of the pond, I am just chuffed that a few loony individuals took the time to put together a rather wonderful musical based on Fred and Aleta, two characters in "I've Been Deader".  Unfortunately, the theater in which the musical was scheduled to play is concerned that they won't have enough seating to hold everyone who wants to see the show.  That, and the roof apparently fell in.  But England's loss is your gain!  Because Richard Maitland, with an extraordinary amount of help from Tom Andrews, Robert Gracie, B. Lloyd, and others, have agreed to let me post the musical here!

It's rather long, so I'll be posting it in segments, once a week or more.

Without further Ado (did I mention you can now buy "I've Been Deader" on Amazon.com, both in e-book and paperback?  Yes?  Okay then.).

Welcome to the Authonomy Theatre! In celebration of National Zombie Day and publication by Taylor Street Publishing of Splinker's novel -- a near-perfect blend of comedy and horror (as he has so often told us) -- we proudly present:

I'VE BEEN DEADER -- THE MUSICAL!


OVERTURE: TO ONE SIDE OF THE APRON OF THE STAGE, A FIVE-PIECE BAND: KEYBOARD PLAYER, DRUMMER, SAXOPHONIST AND TWO GUITARISTS. ALL ARE ZOMBIES IN VARYING STATES OF DECAY.

DADOO:
It was twenty years ago today
Zombie Splinker taught the band to play
We sing songs in the Zombie style
But they’re guaranteed to raise a smile.
So may I introduce to you
Some members of the Living Dead?
The Chorus of the Hungry Brains Club Band!

SIX ZOMBIES SHUFFLE ONTO THE STAGE, IN CLOSE FORMATION, LIKE ‘MADNESS’

DADOO:
I don’t really want to stop the show
But I thought you might like to know
The Narrator’s gonna sing a song
And he wants you all to sing along
He’s gonna tell you all a story
— It’s the Zombie ‘take’ on West Side Gory!
It’s Splinker of the Hungry Brains Club Band!

My lords, laydeez and gennelmen, fellow Zombies and Breathers, please give a warm
welcome to tonight’s host and Narrator of the musical extravaganza – Splinker!


ZOMBIE SPLINKER ENTERS. HE IS DRESSED IN RAGGED MOTLEY, AND CARRIES A LARGE RED BOOK WITH “I’VE BEEN DEADER” TOOLED IN GOLD.

If blood and gutsy sentiment is wanted
I’ve bloody and gutsy ballads cut and dried
For where’er our Zombie banner may be planted
All those beastly Breathers are defied!

SPLINKER:
A wandering Zombie, I
A thing of shreds and patches
Of bloody bones and snatches
And dreamy lullaby!

And what a “dreamy lullaby” Splinker’s written! I refer, of course, to “I’ve Been
Deader” – a near-perfect blend of comedy and horror – and available from Amazon
and downloadable onto your Kindle for a modest sum. Full details on the back of
your programme. “I’ve Been Deader” is a story about… Well, let me explain:

DURING THIS SONG, SPLINKER SETS UP HIS BOOK ON A DAIS ON THE OPPOSITE SIDE OF THE STAGE TO THE BAND, AND SETTLES HIMSELF ON A STOOL.

A CAT RUNS ACROSS STAGE, HOTLY PURSUED BY STAGEHAND

DADOO: (glaring into wings) As I was saying....

DADOO:
Let’s start at the very beginning
A very good place to be.
But our beginning’s right at the end
’Cos we’re working back from X Y Zee

CHORUS: We start with Zee

DADOO: Our first little letter just happens to be

DADOO / CHORUS:
Z – for Zombies, cruel and mean
O – for organs in a belly.
M – for mashed-up brains and stuff
B – all blood and bone and jelly.
I – intestines twelve foot long!
E – for ears so stiff and chewy.
S – so sing this Zombie song
Which will eventually drive you screwy!

But writing “I’ve Been Deader” wasn’t easy. Every night, when other Zombies were out biting and killing, Splinker was burning the midnight oil, trying to find the words for his story.

On many nights he went hungry, for the Muse often evaded him. But his friends and fellow Zombies rallied round, and saved him from a fate worse than… No, actually. Being a Zombie is a fate worse than death.


[With a Little Help From My Friends] (B. Lloyd)

BREATHER: (from audience) How did you feel when you wrote through the night? Weren’t you hungry being left there all alone?

CHORUS: Is it time you were feeding? We’ll bring grub straight to your door.

SPLINKER: Anything that’s still bleeding. I like food dripping with gore.

BERT: Can you believe that’s he’s written a book?
MARY: I knew he had in it him all the time.
SID: What did you see when you had a quick look?
BERT: Dunno – he’d eaten me eyes, the swine !

CAT RUNS BACK ACROSS STAGE, THEN STOPS IN MIDDLE TO WASH ITS FACE. STAGE HAND WANDERS ON, STOPS, GIVES UP AND GOES BACK INTO WINGS

Based on two characters from “I’ve Been Deader” – the book “wot I wrote” – our musical extravaganza this evening tells the heart-rending story of love between aZombie and a Breather (a still-living person) in post-apocalyptic England.

This is Romeo and Juliet – with no balcony scene, but much more blood, so those of a nervous disposition are advised to log off the site now.

There will be a twenty-minute interval, during which fresh meat – er, refreshments – will be available from The Wig & Podium thread.

Orders for post-performance Bloody Marys should be placed during the interval, as preparation of such a popular drink can be a lengthy process, usually necessitating a fight between the bar staff and our vampiric rivals for possession of certain essential ingredients.

SOUND OF FOOD TIN BEING BANGED. CAT PRICKS UP EARS AND WANDERS OFF.

And now, without further ado, let’s get this show on the road!

Stay Tuned For the Next Installment!

And while you're waiting, why not settle down with a good book? 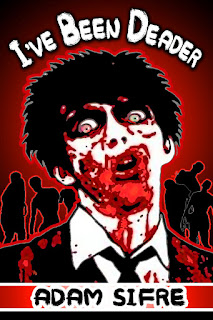