Someone else who isn't me: An Interview with Will M. Jones

One of my favorite indie authors agreed to do an interview!  Now, thanks to my big mouth, I have to talk about someone other than me.

Will Macmillan Jones lives in Wales, a lovely green verdant land with a rich cultural heritage.  He does his best to support this heritage by yelling loud encouragement at the TV when Wales are playing International Rugby and drinking local beers, although (of course) never to excess.

Having been an accountant for much of his working life, he writes in a desperate attempt to avoid terminal atrophy of his brain.  A fifty something lover of blues, rock and jazz he has now achieved a lifetime ambition by extending his bookcases to fill an entire wall of his home office. 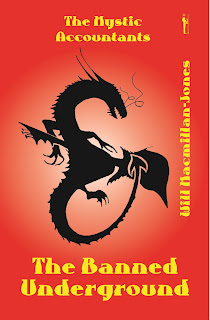 For you lot across the pond, you can buy it here.

Just when they thought that life had returned to normal after defeating the Dark Lord in the Lake District, Chris and Linda get a letter – followed by a knock on the door.  Their friends are back, and they are in trouble – again.

In the mist haunted dwarf mansion, the Banned Underground have played another gig.  But this time the feedback has blown apart the Throne of The Mountain King, and The Banned must replace it, on pain of, well, pain.  But the junior Dark Lord wants his revenge on The Banned, if his Satnav doesn’t prevent him from following the band.

Grizelda, off-white witch and occasional aunt to the teenagers, is rather busy with some mad monks who want to conquer the world, starting with Wales.  Will Dai the Drinking Dragon help?  Will the Tuatha stay out of the pub long enough to render assistance?  If not, Jailhouse Rock looms for the Banned Underground

:Me  Mr. Jones, if that is your real name, thank you for stopping by today.  As you know, I sent you a series of questions designed to discourage you from accepting my offer, but you went ahead and answered them anyway.  Well done.  Let's start with an easy one:  When did you start writing, etc.?


Wow, Adam, this isn’t just an interview, it’s more like The Spanish Inquisition.  I didn’t expect that.  (Sorry, as a long time Python fan, I couldn’t resist).

I started writing really young. I was lucky, because my school encouraged it.  Actually, and for anyone who has read my stuff, surprisingly, I have an A level qualification in Creative Writing.  A levels are the school exams in the UK sat around age 18, I’m afraid I don’t know what the US equivalent is.  Of course, all the fantasy work around then was an inspiration, but oddly enough, the qualifying piece was a sea story.  I still have it somewhere.

Me:  Tell us a bit about your favorite characters.  Do you have any?  I promise not to tell your other characters.


Favourite characters is a hard question.  I love all of my regular guys, and they have become friends really. Even the baddies.  I have been asked why I never give any of them a really hard time, and that’s the reason.  But I like to see all my friends doing well, so there’s a bit of conflict there for me – as the bad guys can only do well at the expense of the good guys.  Tough call, in each book.  Sooner or later, the Dark Wizards are going to have to win something, or they will fall out with me.

Me:  For some readers, a good fantasy book is all about the three L's.  Location, Location, and Lust -- I mean 'Location.'   How did you go about setting up the world of Banned Underground?

All of my books end up in locations I already know quite well.  The mountains of North Wales and the English Lake District, the streets of Manchester and Cardiff.  But that just gives me an excuse to go and revisit some of my favourite places.

Me:  Lovely.  Any new books on the horizon?

Coming out on 27 October, is The Vampire Mechanic.  It was supposed to be my take on the currently popular vampire stories, but ended up pulling in Santa’s Sleigh, and a few other new faces, as my characters got out of hand and created something unexpected. I enjoyed writing it, as I got interested in finding out how it was going to end, and they refused to tell me in advance.  Sometimes it’s hell being a writer.

Next up will be Sax & Thugs & Rock N Roll ( apologies to Ian Dury, for mangling a great song title there).  This is going to be a bit different.  Most of my books are a wild riot, and half the time even I am not too sure what the characters are doing.  But this one is to be a bit more character based, with an examination of the problems a girl can cause when introduced into an all male rock n roll band…

Me:  Give us a little taste of success.  What were some of your early successes as a writer?

My first sale as a writer of any sort were some magazine pieces I did about twelve years ago, for an aviation magazine.  Funnily enough, the then editor who commissioned three pieces from me is now a well known novelist.  David Hewson.  Chances of him recalling me are, well, limited I should think.  I don’t clearly recall the first sale I made of one of my books.  I know where it was, and when – about ten months ago now, in a bookshop in Swansea.  The first signing event I ever did, and I was terrified.  Now I love signing and selling books in bookshops.  It’s brilliant, and nothing can beat the feeling of seeing someone walk to a till with one of your books in their hand, and a smile on their face.  It’s so much fun, it should be illegal.

Me:  All right, all right.  No need to rub it in.  Back to the interrogation.  Where and when do you usually write your wonderful tales?


I write whenever I can.  I’m lucky, as I run a small business from my home, so when inspiration strikes, I can turn on the laptop, and start writing.  As to where the inspiration comes from, I’ve really no idea.  There’s an old adage, of write what you know.  I can only assume that I know some pretty strange stuff.  My work – it’s too much fun to call it that really – is light, easy reading.  Not deep meaningful soul rending, heartbreaking words, but the sort of books you read beside a pool, or when you need a good laugh or something lighthearted for an evening’s entertainment.  That’s all I’m trying to do, really.  To entertain.  My teenage daughter certainly gets a laugh from reading the stuff I put out, and those of her friends who have bought and read my books apparently describe me as ‘awesome’.  I suspect I need to be afraid…

For the Red, White and Blue'ers, you can buy it here: Banned

Me:  Okay, okay.  Enough self-promo.  Pay attention please.
Do you have critique partners or beta readers?


Will:  Sorry.   I always have my books read by beta readers before the publisher sees them.  I’m really lucky to be part of an internet writing group called The Alliance of Worldbuilders, and a few of the guys there have beta read for me in the past.  And I hope they will do so again.  If you are curious, as a group we have our own website, and you’ll see links to some brilliant writers whose names may yet be new to you.

Me:
Who are your books published with?


Two of us so far, (myself and Sophie E Tallis who has written a great high fantasy) share the same publisher, Safkhet Publishing.  I’ve nothing but good things to say about them.  We get on really well as people, as well as having a professional relationship, and that’s such a big bonus.  They specialise in fantasy and Romantic Comedy (Sheryl Browne, anyone?) and do some specialist cookbooks too.

Me:  Let's get to some Halloween dish.

What was the scariest moment of your life?


Now, to the more personal bits, so I’ll be brief, because the books are much more interesting than I am.  Scariest moment?  Probably the time, about 30 years ago, that I crashed badly when landing my hang glider.  We were going to bounce off the ground at about 40 miles an hour, and at the last moment this damn big rock appeared in front of me…missed by six inches.  I did think I was dead for a minute or so though

Me:
Do you listen to music while writing? If so what? Don't ask me why, but people always want to know this.


As anyone who reads my series can tell, I spend a lot of time listening to music.  Blues, Rock and Jazz, one of them is playing constantly.  If not from the stereo, then in my mind.  Or the ipod.  Or, especially in the evenings when I’m trying to write, my daughter’s ipod.  Thankfully, she has decent taste in music, which I attribute to proper parenting.

Me: Other than talking about me, what do you do when you're not slogging away on a story?


What do I do when I’m not reading or writing? Well, I’m a single parent now, so there really isn’t that much other time to think about.  When I get a chance, I love to walk, especially in the hills and high places.  When my daughter goes to university in a couple of years, I’ve promised myself another hang glider.  That will be fun.  Occasionally, not often enough, I do pick up my treasured Les Paul and try to pretend that I’m Peter Green, or Slash.  I can’t see either of them even picking up a pen and pretending that they are me, though.  Pity.

Me: In three words or more, describe what being a writer is like.


Hum, three words to describe what being an author is like.  Fun.  Frustrating.  Frenzied.  They about fit the bill.  It really is great fun, but there’s always pressure from some quarter, and never enough time to do everything you want.  Especially these days, where every author, published, or self published, has to get out there and do some marketing if they want their book to sell.  As to reviews, every author will get good and bad reviews.  The best thing you can do is ignore both.  The good reviews will make you complacent, and the bad reviews upset you, so read none of them.

Me:  Is it difficult writing a series?


One of the hardest tasks for any writer is making the next book better than the last book, and that’s what you need to be focused on.  Plus of course, if – like me – you are under contract, is the next deadline.  I’m contracted for a series of eight books in The Banned Underground series, and I have to deliver the manuscripts at six month intervals, to fairly strict guidelines.  The guidelines are not an arbitrary imposition by the publisher, just a reflection of certain economic realities in the market place we are targeting, and relate to book size and length.  Otherwise, I’m really happy to say, Safkhet trust me to go off and do my own thing with the series.


Me:
What books have most influenced your life?


Finally, some books that have influenced me.  In no particular order here.

The Wierdstone of Brisingamen   Alan Garner

Me:  Okay, that's it.  It's been a real pleasure learning a bi about you and your books.  I encourage my vast army of followers to leave comments here, buy Will's book, shout his name from the mountaintops and name their next boy "Will."

Here are some links to help you do some of these:

The Amulet of Kings