I don't have an answer, really.  I just thought the title was great.

You know you've woken up on the wrong side of the looking glass when Newt Gingrich is waxing poetic on the sanctity of marriage.   Or Mitt Romney claiming his magic underwear will secure him the nomination. 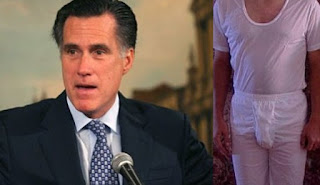 "It was just one time in college."


Listen, I've been blogging about politics for several minutes, and if there's one thing I've learned, it's that I know as much as anyone else.   So trust me when I say it is less important who wins, then how we react.  Not since the great "Less Filling, Tastes Great!" wars of the early '80s has the country been so divided and angry with each other.  Can you believe people are still trying to get their hands on Obama's green card?  Or accusing Sarah Palin of using PAC money to buy a van full of Moose Jerky?

Enough is enough.  It's time to set aside our political differences.  If you're a democrat, go hug a republican.  If you're a republican, go hug a scientist.  Stop arguing already.  I implore each and every one of you, liberal and conservative; rich and poor, black and white, Muslim and Jew, Penn and Teller, to put aside your differences, come together, and buy "Inside My Shorts: 30 Quickies," http://www.amazon.com/Inside-My-Shorts-Quickies-ebook/dp/B006NGE8QW/ref=sr_1_1?ie=UTF8&qid=1326238640&sr=8-1  Like Mitt Romney, "Inside My Shorts" tries to please everybody with $3.04 to spare, and since it can only be downloaded electronically, you'll be saving a tree with every purchase.

So buy my book, and then we can all tea party.