(Slightly revised speech given in 2002). 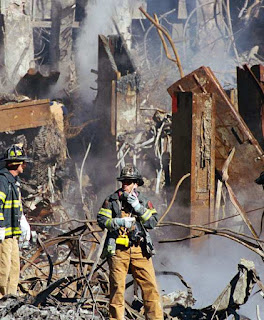 A martyr is a person who endures persecution and often death for the sake of their religious profession or position. It is a Greek word, meaning "witness." On September 11, I witnessed the instant initiation of more than 2,700 martyrs in a span of minutes.

I saw martyrs who chose to sacrifice their lives and their humanity by committing mass murder on a horrific scale.

I saw martyrs who choose to embrace humanity and sacrifice their lives trying to rescue people that could not be rescued.

And I saw martyrs that simply choose to go to work and live their lives, but who died anyway.

When I came out of the Chambers street subway station that day the first plane had already hit and the tower was on fire. There were about 70 people on the street corner watching with me. All of us trying to convince ourselves that it was a terrible accident and that most of the people would be okay.
Then the second plane hit. It must have hit the other side of the tower because I didn't see it. All I saw was the explosion and what looked like an engine turbine come flying out of the building. I later learned that the turbine landed two blocks away on Murray Street. At that point we all just ran. I fell and was stepped on by a few people but almost immediately helped me up. I walked the block to my office. My window looked out at the towers at the time.

I remember seeing people hanging out of the windows, waving sheets or curtains back and forth, and thousands of pieces of paper fluttering in the sky. At the time I couldn't process what I was seeing. I just kept thinking of a ticker tape parade. Part of me thought they were just "killing time" while waiting to be rescued; waving to the world and seeking attention the way some people always seem to do when the news cameras are on.

Then people started jumping; and the illusion was shattered for me. I was no longer capable of narrating a story in my mind to explain what was happening. What was happening defied explanation.

Watching the tower collapse in on itself, destroying in a moment the hope of thousands of spouses, children and parents, defies explanation.

Walking from City Hall to the George Washington Bridge with hundreds of people, many without shoes and covered in a shroud of gray dust, defies explanation.

Under normal circumstances our minds immediately begin making up stories to explain what we see. A constant and comforting voice in our head explains and narrates reality to us, telling us how everything that happens affects us. We witness something and our mind invents a meaning to fit what we witness. Someone doesn't call and we know it means they are forgetful, or they are angry, or we were supposed to call them. There's traffic on the bridge, so it means it is rush hour, or I'll be late. We get through our day by imposing meaning on our world -- by inventing stories to explain what we perceive.

But that day there was no rationalizing anything. There was no internal voice narrating any story for me. The city was on autopilot. We all shared an experience which left no room for internal commentaries.
Last year during the High Holy Days, I remember discussing how the sound of the Shofar calls all Jews back to Sinai, to the moment of revelation. And how we all stand at Mt. Sinai and hear the revelation of Torah for the first time, again and again. It is the greatest of spiritual good. A time when an entire people turn as one to God; and God, as One, turns to his people.

Whenever I hear someone speak of 9/11, or watch video of the towers, I hear a different Shofar. Its blast calls me back to that day, and I am again standing at the corner of Chambers and Church Street -- a witness to the instant infliction of pain, suffering, death, and mourning on a terrible scale. A time when an entire nation - a nation of martyrs - was murdered in God's name.

After 9/11 our rabbi, like many of the clergy, spoke of a new and fuller understanding of the need to eradicate all sources of hatred and evil in our world. She spoke of the preciousness of each and every life; and called on us to experience a new appreciation of every night we're able to kiss and hold our loved ones. A beautiful thought. But the reality is that after a short amount of time passes we tend to ignore the value each moment of life possesses and concentrate on just getting through the next moment, just waiting for the work day to end or for the kids to go to sleep.

And so, what does this all mean? What have we learned in the last eleven years? For all of us who were able to walk away from 9/11, how have our lives changed? There has to be meaning in so many deaths. Something other than shock over the immense waste of life, or anger with people who would do such a terrible thing. I find myself thinking about all those people who died and how the whole story of 9/11 has been laid out in great detail for us, like some great midrash, demanding that we find meaning -- some truth -- in the those terrible events.

We know that he who saves one life it is as if he saved a universe. And we know we are but no more than ashes and dust. September 11 will always call me back to these two truths. It is a Shofar blast that ingrains this paradox in my bones and blood.
Posted by Splinker at 4:38 AM