Sadly, Mr. Furley has fallen on hard times.  The bank forclosed on his apartment building, and his wife finally left him for a face massager named tony. 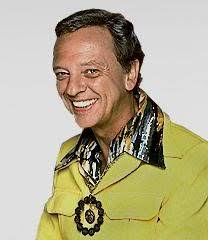 He's crying on the inside.
And so, like so many superstars who have fallen on hard times, Mr. Furley has been selling off memorbelia from his past to the highest bidder.   Recently, he made $250.00, plus 12 twofor coupons at Outback Steak house by selling a pair of Andy Griffith's underwear.

Keep Out Otis!
But greed knows no bounds, and America's favorite landlord recently returned to the auction block with entertainment gold.  Specifically, the last, unfinished script of the hit TV show, Three's Company.  Fortunately for us, I was able to obtain a portion of the script simply by making the whole thing up.  And here it is:
THREE'S COMPANY - Episode XXXIII
"Eat Me"
Jack is making a sandwhich in the kitchen with Janet, who is leaning against the counter reading a magazine.   Chrissy is about to walk into the kitchen but pauses on the other side of the door when she hears Jack and Janet talking.

Jack (taking a salami from the fridge): "look at the size of this thing"

Janet looks up from her magazine: "yum. that looks delicious.  Give me some of that"

Jack hands the salami to Janet: "just hold it for a second. Better use both hands. Its pretty big and greasy."

Janet takes the salami while jack goes back to the fridge: "I'll say. I don't think I've ever held one this thick before!"

Cut to Chrissy making a horrified face.
Cut back to Janet.  She starts to gnaw at the casing to try to unravel it.

Jack:  Janet! Don't use your teeth!

Cut back to kitchen
Jack takes out a knife: how much do you want?

Janet: just a little. Its a bit salty for my taste.

Jack begins slicing as janet pops a piece of bread in her mouth.: "say when."

Janet starts to speak but chokes a little on the bread: (muffled). Wenn!

Jack: you sure you don't want more?

The Moyal was here!

A horrified chrissy bursts into the room only to find Janet on the kitchen floor furiously pleasuring Jack.

Just then Mr. Furley walks into the room. " I KNEW it!" he exclaims.
The rest of the script was written in silver crayon and largely illegible.