DAY 73:
Trump still has not released his tax returns. Other things he hasn't done yet:
1. Made America Safer
2. Made America Greater
3. Made Mexico pay for a wall
4. Repeal and replace ObamaCare
6. Made us sick of winning.
7. Gotten a decent haircut
8. Made America forget about the Russian FAKE news.
9. Criticized Putin.
10. Explain his comments about how terrific the military is doing in Mosul, just two days after we learned that U.S. airstrikes may have inadvertently killed hundreds of civilians, without saying one word to address this tragedy.

WORDS MATTER:
A Federal Judge denied Trump's motion to dismiss a lawsuit brought against him for inciting violence at one of his rallies. Read the opinion HERE

EXTREME DEBTING:
In case you haven't heard, there's a vicious rumor making it's way around the internet - and Congress, the media, the FBI, CIA, NSA and White House - that the Trump campaign colluded with Russia to influence the 2016 presidential campaign.  Crazy, right?  I mean, what possible reason, other than the presidency, would the Don have for doing Putin's bidding.  There is absolutely no reason that I can think of.  I mean, what does Putin have that the Don needs? I can't think of a single thing.

Unless you are one of those people who are willing to believe things like "the earth isn't flat," simply because you've got eyes and and can add 1 plus 1.   Then you might come up with a few reasons.  Such as:

1. About 12 years (11?) ago, Trump was in a lot of debt. (Much like today). Enough debt that that most NY banks - most American banks, refused to enter into any more loan agreements with him.  But Deutsche Bank was happy to step in.  That's the bank that is now paying a $600 million dollar fine, thanks to fired U.S. Attorney Preet Bahara, for money laundering about 10 BILLION dollars of Putin and family and friends money.

2. Around 2008, a 50 million dollar debt payment was due from the Don to Deutsche.  At the time he was trying to get out of paying it because, "the real estate market had tanked."  The Don considered this "An Act of God."

3. So what happens?  A Russian billionaire steps in out of nowhere and buys a property that Don paid $40 million for, for... 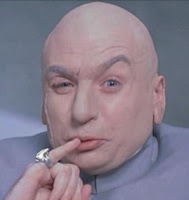 This incredible stroke of good luck happened when the real estate market was in the shitter.

4. Remember Deutsche bank?  The one that launders billions for Putin?  That's the one.  Well, the Don still owes them 100's of millions of dollars and, FUN FACT: These loans are personally guaranteed by our President!

5. The head of Deutsche Bank (FUN FACT: Deutsche Bank has paid about 20 BILLION in fines for illegal banking practices - the latest 600 Million fine was just that - the latest), then fled to greener pastures.  Specifically, the Cyprus Bank.  You know ran Cyprus bank? Another Russian Oligarach (for Putin) and a pig named Wilbur.  Wilbur Ross. Now why would these two choose the head of Deutsche Bank to run Bank Cyprus.  I have no idea.  Maybe you should ask our new Secretary of Commerce, Wilbur Ross.

All this is only the first few steps down the rabbit hole, but you get the idea.

That's it for now.  It's Sunday and my half day of rest.