Welcome to SPLINKERNEWSMAX! The faux news agency that isn't afraid to speak the truth, after we make sure that no one else has gotten in trouble for speaking it. SplinkerNewsMax is not owned by any major media corporation, although we are willing to entertain offers.

DAY 109!: Trump still has not released his tax returns. The president and his family continue to be entangled in ethical violations and conflicts of interest on a daily basis.

The president has decided not to set an example by behaving in an ethical manner.  The ethical violations du jure:

The Kushner's are selling Visa's to the Chinese for $500,000 a pop.  Jared's sister made the sales pitch over the weekend.  If you invest in Kushner real estate, you have a pretty good chance of getting a VISA and being on your way to American citizenship.

Now, before you leap to the conclusion that was an overt attempt to sell Visa's in exchange for giving the Kushner's money, you should look at this ad: 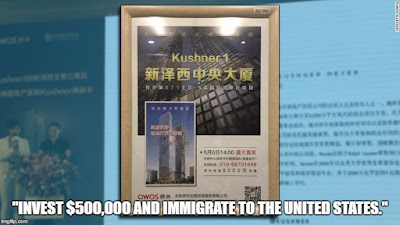 That's English subtitle there, that's not a joke.  That's exactly what was advertised at the Ritz Carlton where Kushner's sister made her sales pitch.

This is a common business practice.  But the president has taken a hard stance against immigration and loose work visas.  Maybe that means he wants to jack up the price.  Who knows?  Wait, I know!  It really does mean that they will jack up the cost! At least that's what Nicole Kushner told the Chinese investors Saturday.  She also mentioned how the CEO of Kushner Failing Real Estate was now working at the White House and President Trump's Halloween face appeared during the slide show as a "key decision maker" on the EB-5 Visa program.

Jared and Trump's daughter are part of the White House now, and it doesn't take a rocket ethic scientist to see that Jared's sister selling a pathway to citizenship, stinks worse than the last five Chevy Chase movies.

Some guy named Dodsen was golfing with Eric Trump a few years ago. The game got rained out and the Frozen dvd was too scratched up to play on the golf cart, so the two got to talking.  Dodsen asked how Eric was able to pay for the golf courses, as banks were not investing in that stuff at the time. 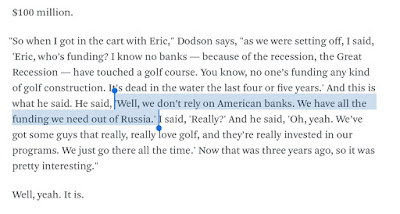 Unbelievable, you say? Not any more!  Eric is saying 'Liar, liar, pants on fire.'  What he is not saying is, "Here are the financials for the golf resorts.  See? No Russia here!"  He's not saying that.

TRUMPCARE:
It's out of the House for the moment and with the Senate.  There are three things you need to remember about the bill:

1. The plan will cut EIGHT HUNDRED BILLION Dollars from Medicaid over 10 years.  As it turns out, a lot of poor people depend on Medicaid to do things, like live.  The Rich don't generally use it.

2. The plan gives a massive tax cut to the massively rich.  Warren Buffet, a guy so rich that his wallet has a wallet, says he'll get a 17% tax cut on the plan.  No more Costco for Warren!

And that's all you need to know about TrumpCare.  Except maybe that a bunch of old white men celebrated by drinking beer with the President.  (Trump doesn't drink.  He says he doesn't like it, but we're pretty sure it's because it doesn't interact well with his meds).

RUSSIA!
Sally Yates, the former acting attorney general testifies today.  She's going to let us know that Trump was clearly warned about Flynn, and Trump ignored the warning.  Trump will respond by tweeting about how Flynn is Obama's fault.  I'm just kidding.  Not even Trump would try to get away with that bullshit.

James Clapper is also going to testify.  That should be fun.

We have plenty of lies and cover up in the investigation already, and I'll go over it in detail in another post.  But the two big ones for today's hearing:  Flynn lied to Pence.  The Administration knew about Flynn's ties and illegal actions and tried to keep it secret, and Nunes tried to keep Yates from testifying.