Welcome to SPLINKERNEWSMAX! The faux news agency that isn't afraid to speak the truth, after making sure no one else gets in trouble for telling it. SplinkerNewsMax is not owned by any major media corporation, although we are willing to entertain offers.
DAY 141 ish:  Trump has still not released his tax returns.   He promised he would, like he promised to call Comey a liar under oath, but so far none of that is happening.

Let's take a break from Russia and spin the wheel ethics. 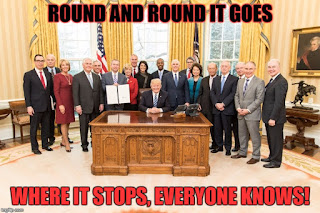 IT'S TRUMP!!!!
Back in January, an ethics watchdog group filed a lawsuit against Donald, alleging that the president is in violation of the Emoluments Clause of the Constitution.  Basically, foreign powers funnel money through Trump hotels and restaurants in order to corrupt the president and influence his actions.

The Justice Department has now filed a motion to dismiss, arguing the plaintiffs don't have standing to bring the federal law suit (basically saying they can't prove damages), and that their interpretation of the Emoluments Clause if wrong.  Plaintiffs have a month or so to file a response, and then we'll see what the Court has to say.

Just keep in mind, all this is because Trump is an unethical, lying, cheat who refused to sell his assets and put the proceeds in a blind trust.  (A blind trust means that you have an impartial individual, like Fred's Bank, invest your money without telling you where it is).

After he accidentally won the election, Trump decided that corruption was more important than removing even the appearance of ethical violations from the office of the President.  Instead of doing the right thing, our President has chosen to profit from the office, hide his tax returns, and continue to use his public position and power to increase his family's wealth.

THE PRESS CONFERENCE!
Yesterday, Trump held a brief joint press conference with the President of Romania 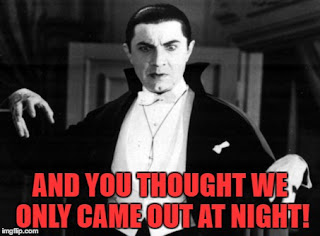 There were only a few questions asked, but a helluva lot of bombshells.  Let's look at them in some detail.

(Editor's note: We wanted to play the clip where Faye Dunaway gets slapped in Chinatown, but our crack investigative team couldn't find it.  Did you guys know the Blockbuster Video closed??)

Like the English language, Trump uses words he understands and throws away the rest.  Comey admitted that he told Trump he was not personally under investigation (SPOILER ALERT: HE IS NOW).  He also said Trump asked him to let the Flynn matter go, that Trump told Sessions, Pence and some other guy to leave the room before asking, and that Trump fired Comey because Trump didn't like the way he was handling the Russian investigation.

Guess which parts of Comey's testimony Trump says are true, and which are lies.

Trump also said that he would testify, under oath, that he never asked Comey for a loyalty pledge or asked him to drop the Flynn investigation.
SPOILER ALERT: Trump will never, never, never willingly testify under oath.

The above were the big headline bombshells that everyone talked about yesterday.  But there were also two others, that are barely getting a nod from the media.

First, Trump lied about his meeting with the Romanian President.  Trump was asked if they had discussed making it easier for Romanian's to get HB1 VISA's, so that more could enter the U.S. 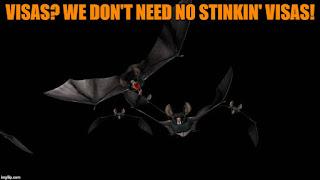 Trump answered that they hadn't discussed the issue.  Then Romaina's top guy immediately corrected our President, saying that they had indeed discussed it, and the visa program was very important to Romania.  Okay, I know that doesn't SOUND like a bombshell.  But either the President thought he could get away with a lie, or he simply forgot what the two leaders were talking about.  Either way, WTF?

The last, and I think biggest bombshell, was Trump throwing the State Department under the bus, AGAIN, when he praised the Arab Gulf coalition for it's blockade of Qatar.  Trump took Qatar to task again, for funding terrorism, saying it had to stop and that this was all happening thanks to his meeting with the Gulf states a few weeks ago.

He said all this, about two hours after Sec. Rex Tillerson had made a rare public statement how our friend Qatar was being hurt by the blockade, and for the sake of it's citizens, everyone should work to lift the diplomatic blockade.

Qatar, as you may know, is what diplomats like to call a "lynchpin ally" in the fight against terrorism.  They allow us to have a military base there, which is vital in fighting ISIS.  Yes, they also fund terrorism.  As does Saudi Arabia.  That's one of the things that make this a complicated world.  But Trump is a simple man. 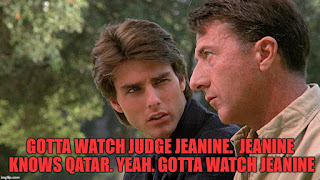 When he took credit for the Gulf States kicking Qatar out of the group, it was reported that he didn't know or "forgot" we had a military base there, or that, whatever else Qatar is, they are an ally in our fight with ISIS.

Here's something else to think about.  A long time ago, we had a man named Ronald Reagan in the White House.  Ronald or his State Department didn't do their homework about a country called "Lebanon."  The U.S. gov't took sides with one faction.  So the other faction blew up an army barrack, killing 241 U.S. Soldiers, 58 French soldiers and 6 civilians.  Then, we were noobies when it came to mid-east politics.  We jumped in without knowing who all the players were.  And BOOM!.

We're not noobies now.  We just have a noobie president.  Trump has widened the rift between Sunnis and Shias. This is a foreign policy decision and you can argue whether or not it's a good one.  It's contrary to Obama's efforts, which sought to establish some ties and trust with Iran.  That pissed off people like Saudi Arabia.  And that always needs to be factored in when making decisions in the mid-east.

Now, you are free to disagree with Obama's strategy.  But I doubt anyone things Obama didn't put any thought into it. 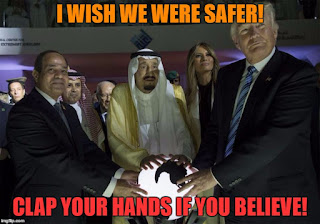 And now, it's time for SplinkerNewsMax's new segment:

Here's how we play.  I agree to watch Sean Hannity until he says something wrong, and then I call him out on it.  Now, before we start, full disclosure.  The last time I watched Hannity, he was yelling at Mr. Slave for forty minutes.  A/k/a Alan Colmes.  But, I'm betting Hannity is so full of shit, he could be president.

So, I'm going to go on youtube right now and watch last night's show until I find something he's wrong about.  You guys wait here.

Okay!  I got about two paragraphs into last night's transcript.  It's around there that Hannity accuses James Comey of violating the law when he gave his unclassified notes to a friend with instructions to release them to the press.  Hannity isn't alone in getting this wrong, of course.  Hayes, from the NC GOP: "It is a matter of national security when disgruntled employees leak classified information, which is exactly what Comey admitted to doing with his notes."

Let's step back for a second.  Trump fires Comey.  Trump Tweets that Comey better hope Trump didn't tape their conversation.  Comey remembers his memos and makes sure that we get to know about them.  The memos contain no classified material, and were written within minutes of every meeting Trump had with Comey.  They confirm that Trump asked him for a loyalty oath, cleared the room and privately asked Comey to drop the Flynn matter.  Okay.  Those are the memos we are talking about.

Why didn't the memo contain classified information, you may ask.  "My thinking was if I write in such a way that I don’t include anything that’ll trigger a classification, that will make it easier to discuss within FBI and government," saith Comey. Good for him!

Here's another fun fact:  The Memo itself was not leaked.  The press did not print a copy of it.  Only that it existed and the substance of at least part of what it contained.

And then we have to discuss the issue of Trump and his people possibly violating the Whistleblower statute. Under law, private citizens who leak unclassified information for the protection of our country are protected.

Trump's lawyer stated they are considering on asking the DOJ to launch an investigation into Comey's release of the unclassified memo.  If they do that, Trump may be violating the law.   If you want to read the article I stole most of this information from, CLICK HERE

If you want to read about stories that are only slightly less believable than what is going on with our country, CLICK HERE!!!

That's it!  I know I promised a new segment, Queer Eye For The Orange Guy, but that has been delayed until tomorrow, due to technical difficulties and my incredibly short attention span.