Someone Else Who Isn't Me: Interview with M.T. McGuire!

Hello Splinkervillains!
Today is the first day of the rest of your lives!  I wouldn't take too much comfort in that if I were you, though.  Today is just more of the same crap you had to put up with yesterday. For example, here's another interview with someone else who isn't me.

M.T. McGuire not only writes books, she also engages in questionable gourd behavior!
If that doesn't get your attention, you must be deader than dead.  Speaking of deader, let's get right to the hard hitting questions.  Hello M.T., thank you for stopping by.  Please put Antonio down and have a seat.

Have you read “ I've Been Deader,” and how much did you love it?

Me: Shaun of the Dead?  never heard of it. Is that one of those movies that tries to be as entertaining as me?

"We're good, but Deader is better!"

Me: How did you start your writing career?

MT: I got fed up with dodgy film scripts and plots that I could pick holes in. I also got fed up with being able to predict the outcome in films and TV programmes. So I started to try and write a plot where the characters behaved in a manner that was true to their personalities at all times. It took me 13 years to write my first decent book. The second one took a bit less time, 18 months.
Me: 13 years??  I bet it must have tons of zombies in it. Tell us about your current release. 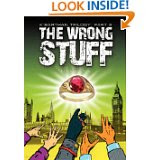 The Wrong Stuff, K’Barthan Trilogy: Part 2 is the second book in my humorous fantasy series, the K’Barthan Trilogy, believe it or not.
Hmm… how can I explain? K’Barth is a parallel world inhabited by all sorts of weird and wonderful species – as well as humans. So, if you ever read adventure books or watch films… and if you like sci-fi you may like this. Some of the highlights are the flying cars, the teleportation device, the action, the sarcasm, the different varieties of K’Barthan and there is a dash of romance.

Me: Sarcasm? From you? Imagine my surprise.  Tell us about your next release.

The next one will be One Man: No Plan, K’Barthan Trilogy: Part 3
Once again The Pan of Hamgee is in the poop. Once again his first instinct is to take to his heels. But now there is nowhere left to run. Instead he must take to the skies to save his friends, the woman he loves, his country and most importantly, his arse.
Me: How do you describe your writing style?

M.T. Pretty much like this, only funnier because I work on it for longer and more interesting because it’s about my characters who are much wackier than I am.
Me: Other than zombies, what do you think makes a good story?
M.T. Something I enjoy. If I enjoy what I’ve written then with any luck, someone else will.

Me: Other than reading "I've Been Deader," What was the scariest moment of your life?

M.T.: When I was on the beach with my Mum aged about 12, she saved a toddler from drowning. That was pretty scary. A wave broke over him, knocking him down and then the undertow caught him. He was rolling over and over, screaming when my Mum leapt up, ran down to the waterline and grabbed him just as the next wave broke. She managed to hang onto him as it washed over them and then hauled him out. The water’s pretty murky in the English Channel, you can’t see your hand in front of your face, so if she hadn’t got to him, he’d have gone under and no-one would have found him.
Me: How do you develop your plots and your characters? Do you use any set formula? CONFESS!

M.T.: Nope, I start off with a few bits of conversation, then I start wondering who’s talking, why are they saying the things they are, what’s the relationship between them, what is the weather doing in their world, is there an R in the month… stuff like that. Then a few situations crop up; arguments, fights, car chases, whatever. Once I have those, then the characters start to react to what is happening to them.
Me: What book are you reading now?
M.T.: Yours, actually. Phnark.

Me: You don't actually have to read it.  Buying it is the important part. If you were to write a series of novels, what would it be about?

Not Me: Well, er hem. I am; the K’Barthan Trilogy. It’s about an inveterate coward who falls in love and discovers that the only way to get the girl is to save the world. It’s lucky for the world, which is in dire need of saving, that he thinks with his trousers.
Me: What are your favorite TV shows?

Not Me: Ah now that’s a pertinent question because they’ve had a lot of influence on my stuff. So, StarTrek – especially the first series, anything from the 60s along the lines of the Avengers, Jason King, Space 1999, The Man from U.N.C.L.E. Get Smart, Randall and Hopkirk (deceased) that kind of stuff.
This show was da bomb!
Me: When you're not reading, talking, or dreaming about me, what do you do to unwind and relax?

Not Me: I’m afraid to say I find something I’d like to see; an attraction, a town, a beach; whatever, so long as it’s a decent distance away. Then I drive there. I am a terrible petrol head. I love my car, really, really love it. I particularly enjoy accelerating more than is wise or prudent and listening to the kind of burbly exhaust note that makes me weak at the knees. I love the gearbox. And I enjoy driving. And I like overtaking things. And I’m afraid I do have a regrettable tendency to pretend that my car can fly and that there are machine guns mounted in the wings and All Purpose Torpedoes behind the headlights and… I should stop before I scare anyone.
Me: Do you have any suggestions for beginning writers? Like telling them to do something else and stop flooding an overcrowded market with crap about vampires and teen angst?

Not Me: Think very hard about what you want to achieve. Selling e-books takes a lot of hard work. Indeed, I sell way, way more paperbacks by showing them to people who ask what I do then I ever sell on line. Unfortunately, my books are too verbose to be financially viable for sale in brick and mortar stores – long story but nobody will take a debut novel that sells for more than £7.99 here.
That means, in order for the printer and the middleman to get their cut then, if you’re doing print on demand like me, you have to limit your works to 70,000 words. If you don’t can’t set your discount at 55% without making a loss. And… you have to discount it to 55% or the book shops won’t get their 34% after the wholesalers have taken their 20%. Sadly few stores will purchase books outside the two main wholesalers. Ho hum… shot myself in the foot a bit there.

Me: Do you have a milestone birthday coming up? If so, how are you approaching it?

Not Me: Yes. I will be 45 next year. How am I approaching it? As slowly as possible, although I doubt it will be as bizarre as my 40th birthday. I had an emergency C section then.


Me: Same thing happened to me, and I wasn't even pregnant. Have you attended a high school reunion and what did you learn?

Not me: Not to go to another one.
Me:  What would you consider to be the best book you have ever read?


Not me: Obviously considering where I am, the smart answer would be ‘yours’. However, I can’t really answer that question because the book changes with different moods and different days. High odds that it’d be something by Pratchett though.
Me: Oh, you were so close! As you may know, there is a lot of controversy over how to spell controversy, as well as authors arguing with readers who post bad reviews (the bastards).  How do you react to a bad review of your book?

Not me: Luckily, both times it’s happened the reviewers have been balanced and flagged up genuine problems which I was able to fix. So actually I was quite grateful.


Me: Other than me, is there a writer you idolize? I realize any such person would be a distant second, but try to answer this one.

Not me: Sir Terry. The man’s a God. His writing is fantastic and he’s a nice person, too.
Me: Use no more than two sentences and one prop. Why should we read your book?

Not me: Because it’s the next big thing, OK, no hang on, I’ll quote Awesome Indies on the subject of Few Are Chosen, K’Barthan Trilogy: Part 1:
“It’s a perfect combination of action, superb characterisation and delightful tongue-in-cheek humour. The story is sleek, well-paced and builds to a fine conclusion that leaves you certain that you want to read the next instalment. It never stops moving, but gives you breathing spaces when you need them, and it’s not like any other story I’ve ever read. Yes, it’s truly unique.”

Me: I never knew two sentences were so many. Entice us, what future projects are you considering?
Not me: I’ve a one on the way called Saving the World is Not for Girls which is about telepathy and a bunch of huge lobster type things with seven eyes and antennae. They have really cool ships, their computer memory banks are tanks of water and their ships are lit by the plankton living in the water containing their computer data banks. That’s not very appealing is it.
OK, try the one after that. It will be called Space Dustmen and is about the reclamation of space junk. So far I just the hero’s name, Driff, a picture of an aeroplane and this piece of conversation.
Driff: “I worry you.”
Baddie Politician with no name: “What? You? Epsilon pond slime shovelling space crap?”
Driff (laughs): “I’d rather shovel space crap than pedal shit.”
Me: God forbid I forget to ask this question of any of you ego maniacs -- I mean writers: Do you have a Website or Blog?

Not me: Yep, http://www.mtmcguire.co.uk is my blog and there’s a more general website at http://www.hamgee.co.uk about my books. I’m mtmcguireauthor on twitter.
Okay!  That's it!  If you haven't checked out M.T. McGuire and her amazing gourd -- and books -- do it now!

Thanks for stopping by!
Posted by Splinker at 8:18 AM