The Syrian civil war is the most murderous conflict we have going on in the 21st century.  Up until  last week, President Trump made it clear that Syria was Syria’s problem. If Assad and Russia were fighting ISIS, what did we care? Wasn’t that a good thing? The Syrian population itself was a Trojan horse that threatened the American way of life.  In the past, Trump had tweeted over and over, “Stay out of Syria.”  “America First.” “I don’t want to be the president of the world.”  Trump gave every indication – promised his voters and the nation – that we were done getting involved in the muck and mire of the mid-east.

In the last 24 hours, Trump blamed Obama for following Trump’s own advice, then launched 59 tomahawk missiles at the airstrip that Assad used to launch his recent chemical attack. Russia has already responded by suspending the agreement that lets their guys tell our guys when they are going to blow something up.  That means the danger of US/Russian incident is a lot higher today than it was yesterday.

In short: Trump decided to get into a “little” pissing contest with Putin and the two of them seem to be experiencing a bit of buyer’s remorse.

None of this changes the probably (definite) collusion between Trump’s people and Putin in the hacking of the 2016 election.  It is, however, the greatest and most effective distraction Trump has made to date.

I just received an email from uncle Ralph that says the following: “Are you crazy? Only a libtard would believe that Trump would engage in war to distract the nation from the Russian Ruse.”  He then goes on to say how the media is spinning this so that we can repeal the 2nd Amendment and finishes with a link to the cutest youtube video of a sleeping bulldog with a kitten on its head.  But let’s address the opening remark.

Unfortunately, it’s impossible for the staff at SplinkerNewsMax to rule out selfish motives for our president’s behavior yesterday.  The five alarm fire that we’ve seen regarding the steady revelations about Trump’s campaign and Russia, his national security adviser, his secretary of state, his secretary of commerce; and the collusion between the White House and Nunes, and about three dozen other incidents, including meetings between his son-in-law and Russian bankers/criminals/Putin cronies, have irrevocably destroyed our leader’s credibility in foreign relations (and trade deals, and everything else).

Oh yeah, and there is Trump’s refusal to release his tax returns and come clean regarding his financial ties and obligations with foreign powers.

Are Trump’s actions, rhetoric and statements made through Tillerson all done on behalf and in furtherance of the interests of the United States, or is it all a big show to provide cover for his possible (probable) illegal actions he engaged in with Russia during and after the 2016 election?
Who knows?

What we do know is that the leader of the United States is a thin-skinned man with a dangerous temperament. He loses credibility almost every single day – whether it’s from accusing Susan Rice of committing a crime, or accusing Obama of wiretapping him, or playing cloak and dagger with Nunes, or pushing to get the taxpayer to pay for a wall nobody believes will make us safer, or doing a 180 degree turnaround on the basic premise of his “America First” promise and getting involved in the Syrian civil war.

And what about those dirty refugees?  Those bomb laden women and children that Trump has warned us time and time again, will destroy our country if we let them in. A few days ago the president, apparently for the first time, saw that those refugee scum are the same children and babies that are being killed in chemical attacks and bombings.  Now what do we do.  Can Trump call these people “God’s children” and at the same time shout “Get them out!”?

2. A massive drought from around 2007-2011 resulted in more than 1.5 million Syrians crowding into     the cities.  Poverty and misery skyrockets.

3. Assad responded to the protest by killing hundreds of protesters.

5.  pro-democrat groups weren't the only ones who hated Assad.  There were plenty of Islamists who        felt the same way.

6. Here are a few groups that now hold territory in Syria: 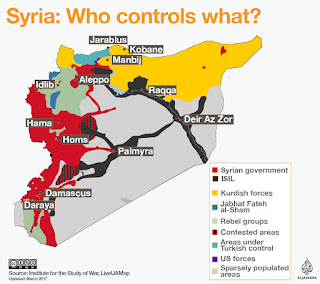 The Syrian government (Assad) much of the southwest. RED
ISIS: A spiderweb through middle Syria with power centers in Alepo and Raqqa. BLACK
Kurds: Northern Syria. YELLOW
Jabhat Fatah: A Jihadist group holding small areas north and south of Alepo. They may or may not      have cut ties to Al Qaeda (remember them?) BLUE
Rebel Groups: Hold area north and south of the Syrian government. LIGHT GREEN
Turkey: A bit of territory that splits the control of the territory held by the Kurds. LIGHT BLUE
U.S. forces: YAY!  Essentially hanging with the Kurds and making sure the Kurds and Turks don't      kill each other. PURPLE

7. Minority religious groups support Assad.
8. Almost everyone fighting Assad are Sunni Muslims.
9. Assad and his security people are not Sunni.  They are Alawite.
10. Iran and Iraq aren't crazy about Sunni's. They support Assad.

11. The U.S. led coalition is there, as of yesterday, to bomb ISIL - The Islamic State of Iraq and                 Levant.
12. 2015: Russia starts it's bombing campaign against "terrorist groups" in Syria. Their definition of         terrorists are basically the rebel army. ISIL, not so much. Those rebel groups have our support.
13.  Russia supports Assad.  Arab groups, like Turkey support the rebels.
14.  A lot of the people doing the fighting come from outside Syria.  Hezabollah (Lebenon) are                  fighting for Assad. Iranian and Afghan fighters are also on Assad's side.
15. The U.S. has always said "Assad bad" but has been hesitant in backing up its words.  Obama's red       line and Congress's refusal to vote for war etc.  Given what we just read in numbers 1 through 14       above, hesitancy might be viewed as reasonable.  That's up to you.

WHAT THE FUCK DOES ALL THIS MEAN?

1,300 tonnes of Sarin nerve gas have been removed from Syria.  Suprise.  Assad still has a bit left over. Tuesday's attack made the world sick and resulted in Trump ordering 59 missile strikes on the airfield.

Alepo. The Syrian army announced last December that it had recaptured Aleppo from rebel fighters. Without a doubt, Assad's biggest victory in the war.  He used  chemical weapons to help do it. Rebel groups in northern Syria tried to consolidate military control over the western part of Aleppo province.
Damascus: Last month fighting in Damascus intensified after surprise attacks by rebel fighters in the northeastern parts of the city. This fighting cuts off around 300,000 people from humanitarin assistance.  The UN keeps asking for pauses so that aid can get through.
While all this is happening, rebel forces frequently fight each other as they jockey for power and position.  Islamist groups have been gaining ground, which is bad.  Then again, everything in Syria is bad.

Kurdish groups are trying to establish self-government in the areas they control.  Turkey hates that.  We like Turkey.  We like the Kurds.  This is bad for us.  Then again, everything in Syria is bad.

WAR. IT'S NOT JUST ABOUT SYRIA ANYMORE

Lebanon, Turkey and Jordan are housing a shitload of refugees. (When Uncle Ralph starts yelling how we only take in Muslim refugees at the expense of Christian refugees, explain to him that all the Christian refugees are running to Lebanon, where they feel safe).

Every once in a while, fighting spills over into Lebanon.  That's bad.  Then again...

That's enough basic background for me.  Given all this information, some of which we have to assume Trump now knows, what will be our long term strategy in Syria.  The answer is obvious.

Will we go deeper into this war?  Can we decry Assad's murder of his own people and tell those people they are not welcome here?

In respect for Trump finally trying to deal with big boy problems, I'm going to give him the day off regarding his collusion with Russia.  Although...

I have to point out that we made a real effort not to harm Russian assets and Russia made no efforts to shoot our missiles down. Also, Jared Kushner may have committed a felony by lying about his Russia meetings when he applied for national security clearance. Oh, and Trump DID quietly send 500 troops or more into Syria right before Assad's chemical attack, which might be viewed with suspicion.  But again, let's give the president the day off.