DAY 91: Trump still has not released his tax returns. Maybe that is because there's no line on his 1040 for "Slush Fund."  Turns out that $170 Million were raised for his inauguration festivities.  That's more than $1 Million Dollars for each person who attended!  Even after paying Three Doors Down and the Rockettes, there has to be a bit left over.  The people holding that money say they are going to give it to charity.  What charity? When?  Answer: HA!

You can't really cover up a carrier battle group. 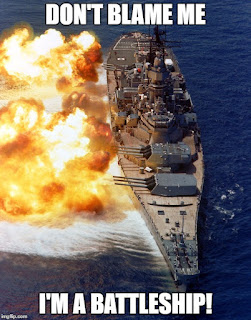 That didn't stop Trump from trying.  Before reading any further, take a moment and think - Hey!  Not  yet.  Keep reading!

Take a moment to think about how the rest of the world is hearing this story.  How is South Korea hearing this? North Korea? Congress? How do all our allies and enemies all over the world hear it?  Okay.  Now stop reading and take a minute to think. Then come back.

April 12. The President retreats to his safe space at Fox News.  During an interview, Trump made it crystal clear that North Korea's provocations would not go without a U.S. response.  He says:
"We are sending an armada. Very powerful. We have submarines. Very powerful. Far more powerful than the aircraft carrier. That, I can tell you."

APRIL 18. The failing NYT reported that when Trump told us we were sending an armada, we were actually sending it to Australia, about 3,500 miles in the opposite direction of N. Korea.

THE NEXT DAY, enter Sean Spicer.  Now, keep in mind, this is a full seven days after Trump lied or misspoke about what the United States was doing in response to N. Korea's activity.

"We have an armada going toward the peninsula. That's a fact." 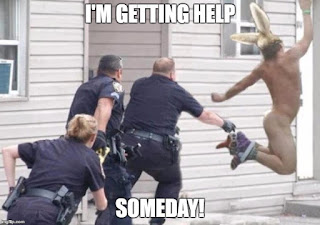 Sean went on to clarify, saying that the carrier was heading to N. Korea, just not before it went in the other direction, engaged in a joint naval exercise with Australia, and stopped by Bora Bora to take some selfies. 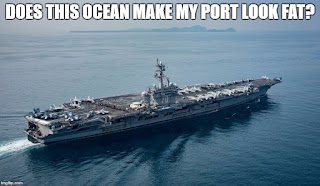 Spicer latest bout of speaking in tongues is alternative fact.  The President's clear message was that, as he was speaking, the 'armada' was heading for Korea.

Trump got in front of a camera, felt like appearing like a strong, virile man, and lied about where we were sending our military might.  Because that is what he does.

Now South Korea, an ally, is pissed and our credibility with them has taken a big hit.  No big deal.  North Korea may be thinking they don't have to take us at our word.  Sure, Trump can throw a few missiles in at Syria, or drop a buko bang bang in the mountains of Afghanistan, but when it comes to the powerhouse that is N.Korea, Trump is a paper tiger.

What does NATO think?  Who knows?

A FEW WORDS ABOUT O'REILLY
In the last twenty years, the conservative movement has been driven by sexism, racism and fear of losing white privilege.  O'Reilly led that charge.
Fuck O'Reilly.

It is not okay to grab a woman's pussy without permission. 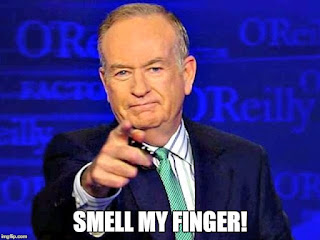 Republicans need to take their party back, or admit they are a far fucking cry from being the party of character.

DAY ONE
On Day One, Trump promised to tear up the terrible, no good, very bay Iran deal.  He felt so strongly about doing this, that he even got the country's name right - several times!

Yesterday, on Day 89, Rex Tillerson screwed up and admitted that Iran is abiding by the terms of the agreement.  Technically, it's not a "screw up" because Rex is required by law to report to Congress on the deal, and lying about that stuff might be taken the wrong way.  But he screwed up, because he chose facts over alternative facts, and that doesn't play well with the President.

So the next day, Day 90, Rex Tillerson, the groundhog of cabinet members, made a rare surprise press conference.  After taking a minute to check for his shadow, Rex went on to list Iran's "alarming and ongoing provocations that export terror and violence, destabilizing more than one country at a time."

The long and short of it was another episode of showmanship.  Trump can't tear up the Iran deal, but he needs to show toughness on Iran.  He needs to be able to lie to his voters by showing a little foreign policy flash.

Uncle Ralph just emailed me.  He said, "Dear nephew.  Fuck you.  Of course we can back out of the deal.  Fuck Iran.  If those ragheads think we're just going to let them do bad shit, then fuck them."

So, sorry Ralph.  No go on tearing up that Iran thing.  You might as well start blaming the liberal media now for forcing Trump to break yet another campaign promise.

I bet if Bill was still on the air, he could fix this.

Oh yeah, here's something else to think about.  There actually is a moderate wing in Iran's government.  They are the guys who pushed the Iran deal on their end.  They put their reputations and the Iran's chances of evolving into a more moderate government, on the line.  They put all their money on the Iran deal.

Yesterday, Rex Tillerson kicked those guys in the nuts.  The hardliners in Iran are already all over this, saying that the U.S. can't be trusted, etc. etc.
Apparently, the hardliner's have a point.

To sum up April's foreign policy actions: We lied to everyone, including South Korea,  about where we were sending our aircraft carriers. We pulled the Persian rug out from under the moderate's feet in Iran. We put ground forces in Syria in further danger by not coordinating the missile strike with our forces on the ground, while possibly committing an act of war without going to Congress.  And we had a piece of chocolate cake with China, in return for Ivanka getting three trademarks, and we congratulated the new dictator of Turkey.

That's it!  No time to discuss Trump's Russian connections today.  Which is a shame, because we just had the 12th prominent Russian to die "Final Destination" style since the Trump/Russia scandal broke.  Nikolai Andrushchenko was an anti-Putin journalist. Someone beat the shit out of him last month and he died yesterday. Now, number 12 may not have ties to Trump.  But tomorrow we'll follow the dead bodies of those that did.

Plus HealthCare!  It's back on the table. Maybe.  Who knows??