DAY 96: Trump has still not released his tax returns.  Maybe he has to see if using the State Dept. website to promote his properties counts as income.  The news that the government website was promoting Mar-a-largo is a major ethics violation, but it's only the most recent and public one. 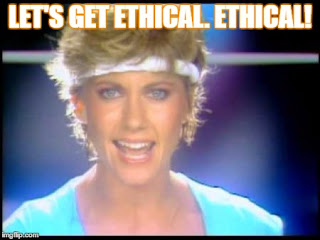 * the trademark grants China has given  to both Trump's and his daughter's companies.
* the strange timing of last month's Yemen raid disaster and the Arab Emirates (the                  country that really stood to benefit from the raid), finally approving Trump's golf resort. 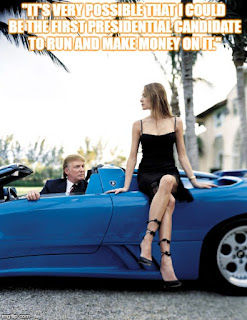 That's not a joke quote.  That happened.  Don't believe me?  Well then, fuck you.  Or CLICK HERE .  It's a fascinating article from Forbes, way back in the day.

* PAY TO STAY: Where the President goes,  money follows.  Secret Service, security, etc.  They all need a place to stay.  And when Trump is at Mar-a-largo, that's where they stay.

* THE PROPERTY OF AZERBAIJAN: Okay. Not exactly a Harry Potter novel, but pretty close.  If you read this blog, you'll remember that, like the scary prison in the Potter novel, you can't get to Trump's property in Azerbaijan using roads.  Azerbaijan is one of the most corrupt countries in the world, and home to the unopened Trump International Hotel and Tower. This hotel is perhaps the best example of Trump's shady business ties.  Specifically, the hotel partnered up Trump and Co. with several corrupt officials in the Middle East.

Here, we shift from violating the Emoluments Clause, to violating the Foreign Corrupt Practices Act.  Because, when it comes to criminal behaviour, everyone likes to go alphabetically.

The FCPA prohibits American companies from participating, AT ALL, in bribery schemes in other countries.  Doing so can cost you $2 million and five years in jail.

The Azerbaijan deal grants daughter/wife Ivanka oversight of the project. The Trumps' main partner in this nonstarter hotel is Anar Mammadov, the son of Azerbaijan’s transportation minister.  That guy is the most corrupt official in the most corrupt government in the world. Among other things, Mammadov has a cozy, corrupt relationship with Iranian Revolutionary Guard. Trump's partner is closely linked with  a construction firm that was sanctioned by the United States for its role in Iran’s attempts to develop an arsenal of nuclear missiles. 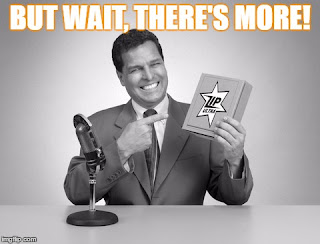 The President opposed the FCPA in May 2012, about thirty minutes before he was ready to violate it in Azerbaijan. According to reporting in The Atlantic, Trump called the FCPA “absolutely horrible” and argued that, since other countries do not have the same provision, American corporations are at a major disadvantage in which bribery is the norm. Can I get a "LOL" brothers and sisters?

THE DARK TOWER
Since Trump won't remove himself from his businesses, every time he gets a new tenant, an angel loses it's wings.  Like Xiao Yan Chen, a/k/a Angela Chen.  She purchased a $16 Million Dollar penthouse at Trump Tower on February 21. Chen runs a consulting firm that, “facilitates the right strategic relationships with the most prominent public and private decision makers in China.”

Her company consults for the U.S. Department of Commerce and the U.S. Trade & Development Agency.

So what?  So what?  What do you mean, "So what??" Trump takes money from Chen, who's company works with the U.S. government. THAT'S WHAT!

Shit.  You know what?  I don't have time to go through the list.  I think you get the idea.

And don't get me started on Chinese trademarks!

Okay, that's it.  I mean, that's not really it.  There are a lot more.  But that's all we can stomach for today, here at SplinkerNewsMax

If I have time, I'll do an afternoon blog where I interview the president, using his actual big boy words and everything.