Regarding the terrorist bombing of Manchester.  Words are insufficient, but they are all I have. My heart breaks for the children and young adults that suffered last night. And it was already broken for the children of Syria, the children of Afghanistan, Iraq, Pulse Nightclub, Paris, Boston, San Bernadino, Fergusen, Turkey, and North Korea.

Our hearts will always break, and we will always help each other heal. That is what we do as people, if not always as policy.

In a few days, or a week, Manchester will be off the front page.  I hope that we can all keep the city, and all the cities, in our hearts a bit longer. There are no short news cycles for the victims and families.

DAY 123: Trump still has not released his tax returns.  As some of you may know, the Trump campaign had multiple contacts with the Russians, before, during and after we the world learned that those Russians were attacking us via the influence campaign on the 2016 election.  That's pretty weird.  Trump and his administration have consistently failed to disclose that the meetings took place and have actively denied that they even happened.  That's weirder.

What does any of this have to do with Trump's dirty, little secret?  That depends on what his tax returns would show?

1. Given all the smoke (and fire) surrounding Trump and his ties with Russia (Flynn taking the 5th, Trump knowing Flynn was under investigation even before hiring him, Flynn lying to investigators about who paid for his appearances at Russian events, Flynn influencing U.S. policy toward Turkey when he was an undisclosed foreign lobbyist for the country, his refusal to criticize putin, Trump's disclosing of classified info to Russia, etc. etc. etc. etc. etc. etc. etc.), it is understandable that this presidents ties to foreign money might represent a real national security risk. 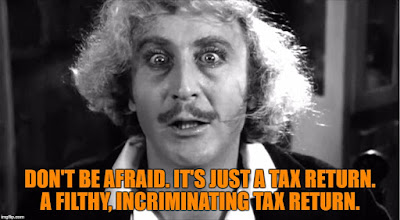 2. His returns would provide evidence (or lack of) regarding conflicts of interest that might violate the Emoluments Clause of the constitution (CLICK HERE) . Better yet, CLICK HERE!*

PAUSE:  Even if we get his full tax returns, we might not get answers to these first two questions.  Maybe just a fuckload of more smoke.  Okay, now what we'd definitely get (besides a headache).

3. How much he made.  Duh. You weren't even thinking of that, were you?

4. Trump's deductions, including how much he donated to charity and which charities.  That would be interesting.  Trump has repeatedly bragged about the size of his donations and his hands, but reporters have been unable to find proof of either.

5. How much he paid in taxes.  We have a president who is pushing for major tax reform.  It would be nice to know how much he paid under the current system and how much he stands to gain from his proposed system. Remember, Donald often brags about getting away with paying as little as possible.


6. If he has foreign bank accounts.

7. Did he pay taxes to foreign governments?

8. We'd learn which businesses Trump materially participated in.  If you've  been reading this blog for a while, and you have a better memory than me, you might remember a post on Trump's business dealings with a corrupt government official in Azerbahgblahblahblah, who routinely laundered money for elements of Iran's Revolutionary guard.  Stuff like that might be a problem.

That's a lot of stuff we could learn.

WE NOW RETURN YOU TO OUR REGULARLY SCHEDULED RUSSIA SCANDAL 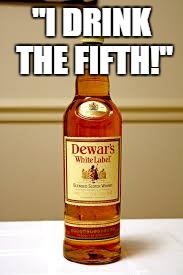 Flynn refuses to provide subpoenaed documents to Congress, and has invoked his Fifth Amendment rights.  According to Trump, this means Flynn is guilty.  Only mobsters and Clinton associates plead the Fifth.  Everyone knows that.

The Flynn disaster bears re-reading.  Quickly: Flynn was a Lt. General in the army, but only a MAJOR part of Trump's campaign team.  We now know:
1. Flynn told the Trump transition team he was under investigation.
2. Trump made him National Security Advisor anyway.
3. Flynn lied to investigators (a felony) about who paid for his jaunts to Russia.
4. Flynn did not disclose that he was lobbying for Turkey while he was in the White House.
5. Flynn tried to influence foreign policy regarding Turkey.
6. Pence, Trump and Spicer have all lied about what they knew about Flynn and when they knew it.

What we don't know, is why?

But, do we really need to know why? (Yes).  The fact that Trump made Flynn his national security adviser, already knowing much of this, is a bit terrifying.  Forget everything else, and focus on the judgement of this president.

Trump has engaged in an avalanche of mismanagement in the first four months of his Presidency.
Hiring Flynn.
Wasting several of his first 100 days arguing about crowd size.
Attacking our intelligence community.
Throwing his own people, including Pence, under the bus. A lot.
Inviting the Russian ambassador and foreign minister to the oval office - At the request of Putin.
Tweeting that Flynn should be ask for immunity.
Firing the guy investigating his campaign's collusion with Russia.
Bragging about it to Russia. In the Oval Office.
Disclosing top secret info to Russia. In the Oval Office.
Top secret info. that came from Israel.
Admitting it came from Israel on national television.
Coordinating the military response to Syria in his private club, filled with people that had no security clearance.
Attacking the media, and telling Comey to jail journalists.
Selling a GOP healthcare reform bill that he didn't understand.
Not understanding the bill would fail to pass Congress.
Rushing the worst written executive order (travel ban), probably ever.
Keeping his language on a total and complete ban of all Muslim immigration on his campaign website until last week.
Calling the FBI investigation an witch hunt.
Etc. etc. etc. etc. etc. etc. etc. etc.

That's off the top of my head.

Even if you are republican, hate the MSM, and shout out "Take that Obama" with the conclusion of every bowel movement, all that has to bother you a little.


*SplinkerNewsMax is not responsible for all intentional clickbait on its website.  By clicking on the link and buying zombie books, the consumer waives  all rights to leave negative reviews or roll their eyes while reading any material.  All profits earned from the sale of books or other promotional items will, if history really repeats  itself, eventually make their way to various diners in the North Jersey area.
Posted by Splinker at 5:58 AM